In early September 2012, me and two other sound recordists/game audio folk (Andy Riley & Augie Restivo) went to visit a friend of mine who had recently installed a bee hive into his garden. We were armed to the teeth; our total gear list consisted of 10 microphones and 4 recorders. We all felt slightly goofy bringing that much equipment for what was supposed to be a leisurely afternoon in the company of approximately 35000 bees (in fact my friend the owner figured the number was close to 50000). But as it turned out, having that many microphones simply meant we could geek out and stick mics wherever we wanted in order to try and record this army of bees from every possible angle.

We captured a lot of material that day, but below are what were in my view some of the most interesting results.

This first snippet was captured with 2 tiny DPA 4060s taped onto a stick and placed right at the little gap that the bees use for entering and exiting the hive.

The next sample here was captured by two Sennheiser MKH8040s that were placed inside the top compartment of the bee hive. The lid was then placed back on the top. It’s essentially inside the hive, though the top compartment did not have any nuclei. All compartments were separated by mesh, so it was easy for us to get a very close internal perspective recording this way.

Here’s the two above samples mixed together. Everything was recorded simultaneously. We had several other microphones recording at the same time, but I did not include the results of those here – partially because I’m lazy and partially because they sound more conventional.

Now let’s show some pictures of the setup… 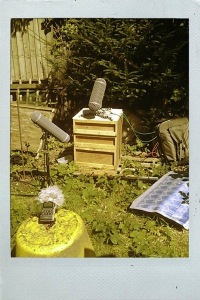 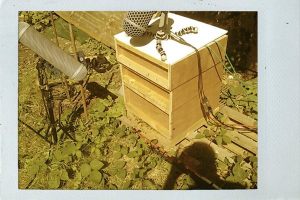