I really should be studying. In fact I should be sleeping. Though it is only 21:30 right now, I am waking up at 5am again for the morning game drive, which acts as a practical class in the field. When we return a few hours later, it’s time for breakfast, followed by some time ‘off’ for studying notes and books and excercises. Then follows an hour long lecture on the subject of the day – probably more about trees tomorrow. We’ve done a hell of a lot of tree stuff in this first week during the FGASA field guide course in Zimbabwe. 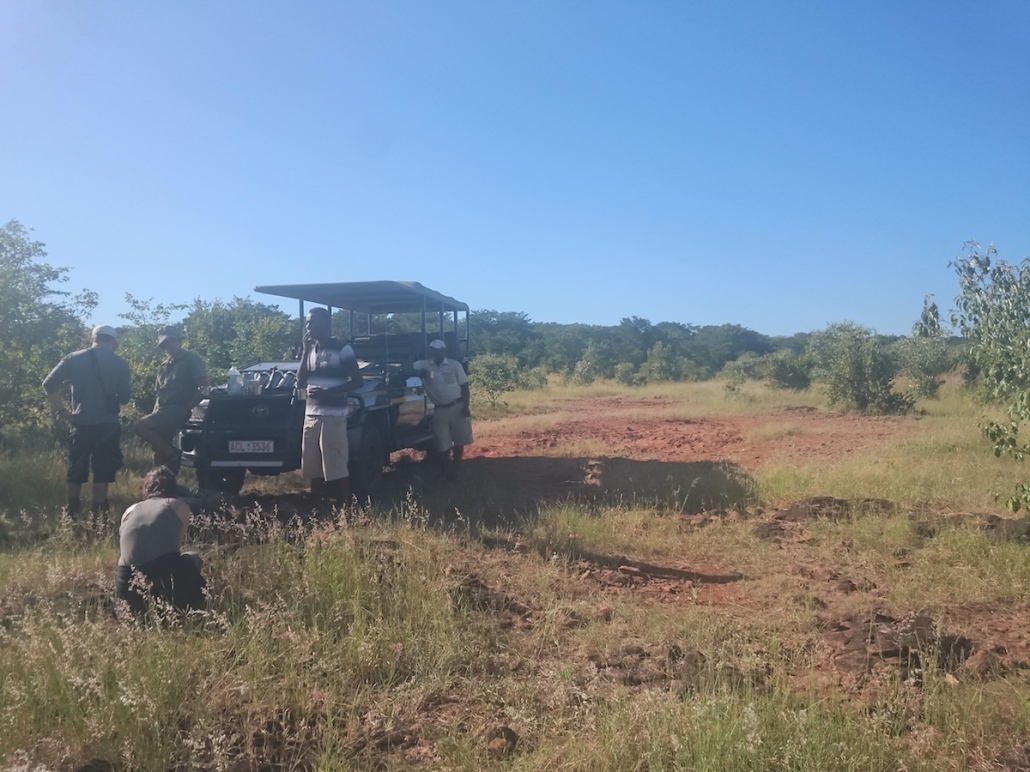 Stopping for our morning coffee break

After the lecture is over, it should be about lunch time – finish your food, and continue studying for about an hour or three until it is time to get back into the vehicle for the afternoon/evening game drive. Return to camp three hours later, have dinner. It is eight o clock now. Study for another hour, two hours – bed. Alarm goes again at 5am, and the circle continues. No days off – this is the seven day a week schedule for the 55 days of this course.

I really should be studying or sleeping right now. 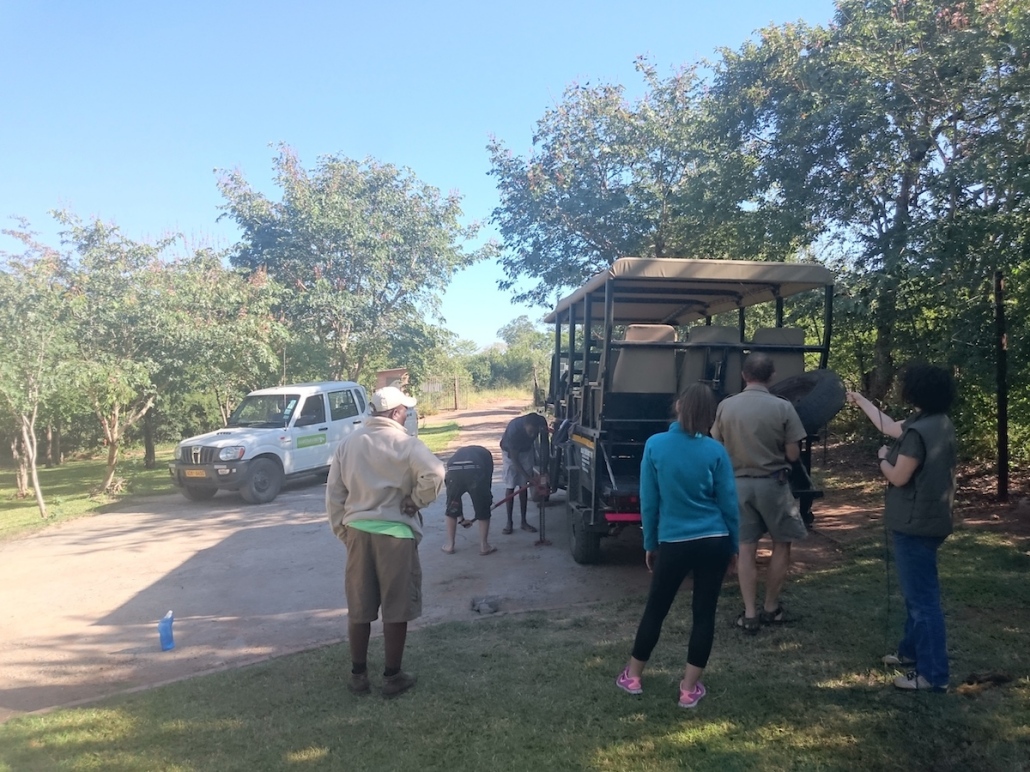 Last night I got woken up at 2:30 by a lion walking past and roaring about 10 meters from where I sleep. I thought I had been dreaming about lions until I heard him roar again. So I jumped out of bed, scrambled my recording gear together, and stumbled outside to try and record it. Had a chat with the night guard, set up my mics, and tried to go back to sleep – no luck on the sleeping part after this, but I did record the lion when it roared again, though fairly distant, and in tandem with a jackal.

Recording sound so far has been hit and miss. The course is my main focus here, and recording opportunities suffer as a result. Though I could have my mic set up along the perimeter of the camp so I might have captured this lion without needing to wake up, the camp itself is quite noisy – for instance, there are sprinklers spraying the grass almost continuously. Camp is also close to some roads, and besides my study group, there are about 10 volunteers on the property.

None of this was unexpected, and the reserve itself, where we do our daily drives and practical / field lessons, is stunningly beautiful. It is small (about 6000 hectare, or about the size of a town like Brighton), but it is full of life, smells, and sounds.

A panorama of part of the reserve

We make a plan

I have been only a week here, but a few sentences people commonly say are starting to stand out to me. One of which is the question: “Which crops do you grow in Holland?” Growing crops is a big deal and regular subject here, and that is compounded by the fact that the rainy season this year has been very dry. The common people are suffering, their crops haven’t grown to the right size, it is too hot and dry for the time of the year, and there is not enough food. When they ask me if it rains much in Holland or the UK, they laugh wholeheartedly but with an undertone of disbelief when I say it rains too much.

Another sentence I have heard a lot is “We make a plan.” For everything here, we make a plan. And so, for me to be able to record inside the reserve, where all the good stuff happens, we are making a plan. Mark, the instructor guide at the course who is teaching us everything, has strongly discouraged me to place microphones unprotected inside the reserve. Baboons are amazingly curious and smart animals, but they also behave like a group of naughty children with very big teeth and strong jaws when they see something they haven’t seen before. They will rip my equipment to shreds.

So the plan is to use a cage of some sort, we put the microphones in it, tie it to a tree and the ground, and leave it running from dusk till dawn. There is a leopard trap here that might be able to do the job.

While recording is not my current main focus here due to the course, I am naturally still trying to squeeze as much of it in as I can. So far I’ve been able to record lion, elephant, jackal, and a whole lot of birds. Most of the recordings I made up till now don’t live up to the standard of ‘what I am after’, but that will come – these are mostly made quickly from the car during the game drives. I’ve also had occasionally some time to take out my Telinga parabola and record isolated birdsong, and have done a few night time recordings from the edge of the camp (with all its noisy problems). I’ve recorded a great deal more than the snippets below, but these should give an overview of some of the sounds around us here.

This is likely going to be the last time for a while that I post here. The studies so far have been busy, but they’re getting borderline intense now, and it seems it is only going to intensify as time goes on. Before I do actually sign off for potentially a pretty long time (it depends, we’ll make a plan), I’d like to quickly dip into what this course is like. When I was doing research myself before signing up and heading out here, there wasn’t a great deal I could find (though I did find this very informative blog here)

It’s only been 4 days so far, but it feels almost like weeks – I suppose spending about 6 hours a day outdoors in the bush studying and learning should mess up your feeling for time a bit. Thus far we’ve covered a lot of plant and tree identification, learning not only what they are called and how to ID them, but also their uses (including, but not limited to, ‘toothbrush’ and ‘toiletpaper’ bushes – it might come in handy one day). We’ve covered basic ecology. A great amount has been explained about the animals that we encounter during our daily drives, which so far include elephants, zebra, giraffe, baboons, buffalo, kudu, impala, birds birds birds, insects – the list goes on. Even so, we haven’t actually gotten to the animal behaviour, mammal, bird or insect modules of the course yet.

There is obviously lots more to learn, once again an overview of the syllabus is here.

I described the daily schedule above, but what is the purpose of all this? We get dumped a lot of knowledge, and so far it’s a scramble to try and keep up with it all. The ultimate goal is to start seeing and creating links between all the topics, subjects and information, and as a result, to be able to tell stories about the savannah and everything it inhibits, for a group of visitors that you drive around in a 4×4. In other words, to be a safari guide.

Now it really is very late, and my alarm will ring soon. I will just leave you with a picture of Victoria Falls, which I visited on the Sunday before the course started. 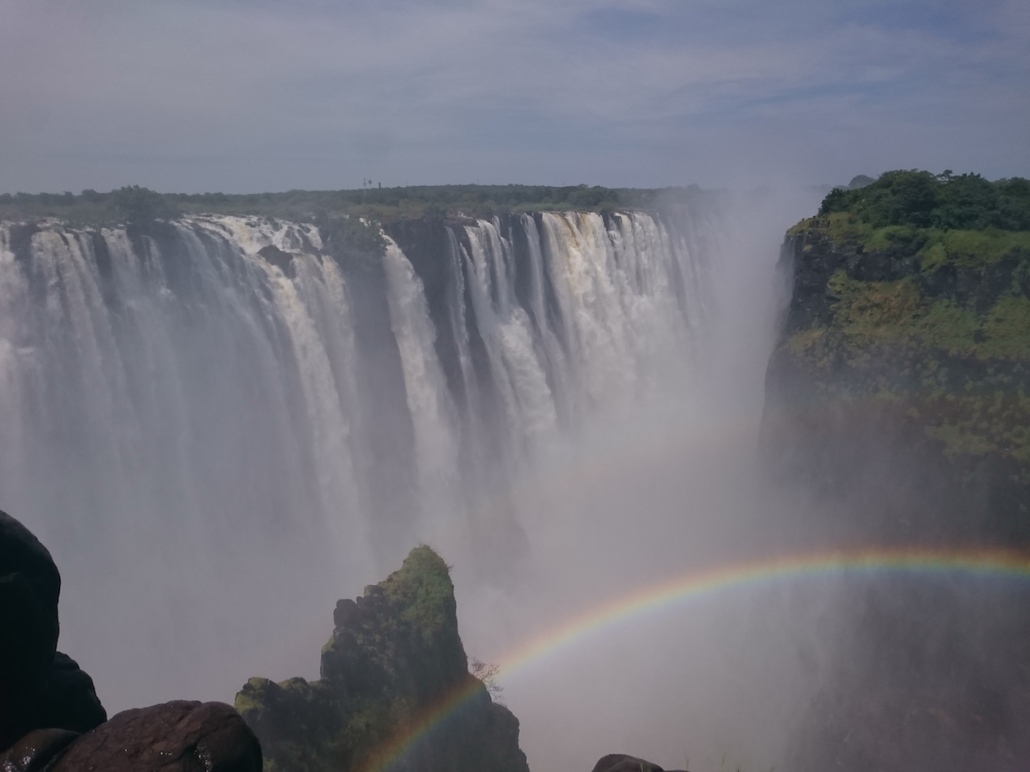