Read part I about recording & camping in Botswana here

Namibia is a land of extremes: huge empty deserts with glowing red sand dunes and rock formations shaped as if placed by giants, a wild coastline littered with shipwrecks, whale carcasses and immense seal colonies, lakes and salt pans attracting all the wildlife that you’d expect from an African country, and lush green tree and shrub savanna in the Caprivi strip bordering Botswana, Angola, Zambia and Zimbabwe.

Its natural extremities not withstanding, this is a country easily traversed by car, boasting endless straight-lined gravel roads through its vast expanses of nothingness and national parks. Unlike Botswana, a 4×4 vehicle is for many areas not even a necessity, though having one opens up parts of the country that would otherwise be inaccessible. As for our trip specifically, we only needed the 4-wheel drive engaged on a couple of trails in Namib-Naukluft national park. 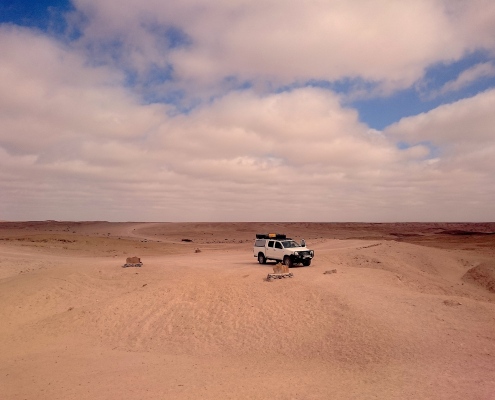 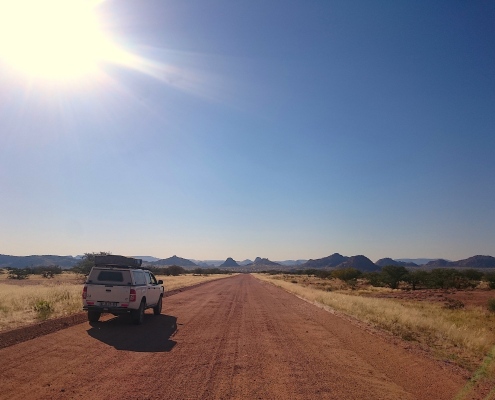 It is a vast country, spanning a landmass almost as large as that of France and the United Kingdom combined, while home to just a couple of million human inhabitants. There are plenty of wild and remote corners to find. Yet, if like us you travelled here coming from Botswana, then Namibia can somewhat dampen the sense of adventure depending on which parts you decide to visit. Suddenly you come across a fuel station at least once a day, national park administration offices have computer-based registration systems, and if you stick to the rules there are no worries about river crossings and deep sand to get stuck in.

Wildlife does, though to a much smaller extent than Botswana, roam free in Namibia as well, as guide books warn of the dangers of desert elephants when camping close to water sources. But places like the world-famous Etosha national park feel much more like a controlled experience, with its fenced campsites, shops, restaurants, swimming pools and neat gravel roads. 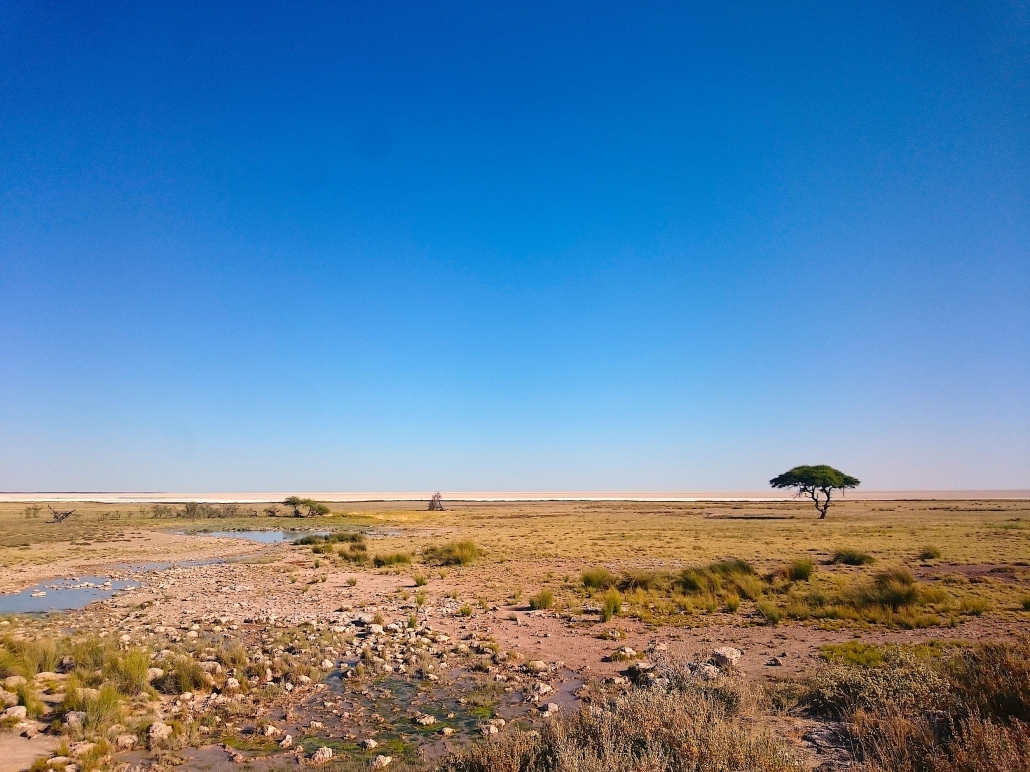 Grumblings of too much comfort and touristy developments aside, Etosha is in some ways deserving of its reputation as one of Africa’s best wildlife viewing places. Its wide open plains allow for an excellent field of vision, but most spectacular are the water holes that you can leisurely visit at night, being merely a short stroll from your camp site or luxury suite. These waterholes are dimly lit and surrounded by seats, safely tucked behind low stone walls and electric fencing, allowing us gaping tourists to watch wildlife go about its nocturnal business undisturbed.

It makes for an experience that is akin to viewing National Geographic documentaries in real-time. Some of our absolute highlights of African wildlife watching happened during these nightly waterhole visits – seeing a cautiously approaching giraffe suddenly being chased by shades in the dark (most likely lions); hyenas skittishly circling wary elephants protecting their young; all and sundry of the African bush appeared to stop by these places every night to provide some entertainment.

Etosha’s campsite waterholes – not quite the same as being surrounded by the wild, but spectacular viewing nonetheless

The recordings below were made during two separate nights when we visited these waterholes. In both cases, we observed two rhino meeting and greeting each other, an event that goes accompanied by various excited exhales, grunts and surprisingly cute squeaks and squeals. These were recorded at about 50m distance using my handheld Sony D100, resulting in not the cleanest of recordings, but illustrating the moments nice enough nonetheless.

Ultimately, observing and recording wildlife was just part of the reason to visit Namibia, and everything combined I had already spent 2.5 months doing so anyway in both Zimbabwe and Botswana. So from Etosha we continued southwards into the spectacular deserts, passing gravity defying rocky outcrops and otherworldly vegetation while generally finding ourselves blissfully alone – a day could pass easily with hardly coming across another car on the road.

The sadness of the Cape Cross seal colony

There was however one wildlife spectacle that we were not to miss, the huge colony of cape fur seals based on the stormy shores of Cape Cross. During the breeding season this colony may reach upwards of 200 000 members, though when we visited the numbers were smaller – but large enough by far to produce a great chorus of wailing calls and frightful grunts, and an accompanying aroma that must be experienced rather than described.

Yet there is a great sadness to the context of the sounds that are shared below, and it is somehow fittingly expressed by their whimpers, weeps and growls, seemingly conveying both sorrow and aggression. There is a culling in place in this so-called protected reserve, resulting in thousands of deaths each year by the hands of man, using clubs as their blunt tools to butcher these animals to death.

The incredulous explanation of the Namibian government for this policy is that these seals simply are too numerous, their food consumption resulting in losses to the local fishing industries. Even if we would attempt to consider this explanation as vaguely reasonable, the severity of these damages are disputed, and provide regardless no justification as to why this specimen of a human being is profiting from the cull.

A more uplifting example of a species that lives together in large groups is that of the nifty sociable weaver. These birds are commonly found throughout the southern Kalahari region due to the presence of certain stiff grasses, important materials for their nest construction. And their nests are a feature to behold, often humongous in size, their apparent weight giving the impression of imminent capitulation of the host tree. But it’s not just trees that are are favoured by these skilled little weavers, as many a nest can be seen hanging from telephone poles.

Over a hundred pairs of birds can live within a nest, giving it features similar to an apartment block. Entire generations live together within its catacombs, the young helping out with raising their siblings by doing daily chores of maintaining the internal chambers and finding food. They are a very busy and chatty type of bird indeed, illustrated by this recording that captured a bunch of them frantically contributing to the maintenance and renovations of their nest.

Our last stop, as it were, was South Africa. For me personally it was a fairly bewildering experience to stay for a few days in a city as bustling and large as Cape Town, after having spent over three months almost exclusively in nature with never a lot of people around. And for the context of this website and the purpose of this post, I will keep this section about South Africa relatively brief, as during this part of the trip not many sound recordings were made.

After the three weeks of driving along the coast from the Eastern Cape back towards Johannesburg, the impression that we were left with upon leaving was that we had only just started to see a glimpse of the country. While this is of course always true when your visit is for a mere few weeks, the sheer size of South Africa with its mixture of cultures and its diverse natural beauty makes this perhaps even more strongly so.

The singing and clicking of Common Dolphins

I made my only recordings here during a whale watching trip that we took with a few other visitors, on a little rubber boat that sped along at sometimes alarming speeds. This was the first and only time I got to use a hydrophone while in Africa, and the experience left me wanting for more. As soon as we were out on open sea I dropped it into the water, instantly hearing all manner of squeaks, tones and clicks coming from the common dolphins swimming nearby.

The following recording combines three short snippets of these sounds, each playing back at full speed and then followed at roughly half speed straight after. The dolphins produced a lot of ultrasound frequencies that we normally can’t hear. As these recordings were made at 96khz, some of this content was preserved. Therefore the slowed down versions showcase a richer & fuller sound, pitching down all those frequencies to within the limits of our own hearing range.

As touched upon before, this country is nothing if not very diverse. Yet it must be said (and perhaps expected), the conversations we tended to have with locals often expressed fear and anger about the political and sociological issues that plague the nation. In fact quite a few people we spoke to expressed a wish to leave the country, and some (white) South Africans even went as far as explaining, without irony, that things ‘before the change of government’ were better.

But there were plenty of positive attitudes to be found as well, the crown of which must probably go to an entertaining guide that took us for a hike into the Drakensberg mountains.

He relayed stories of his country both funny and brutal, most disturbing of which were those of his first hand experiences with extreme violence. Yet he was probably the liveliest and best humoured man I had come across in a long time. Most tellingly, he emphasised how the people of South Africa have already withstood so much that there surely must be nothing left that can bring this nation down. In the man’s own words, “If South Africans want to pack up and leave the country, then let them go – we don’t need them here!”

Sound recording & camping in the African wilderness – Part I: Bo...