“What is your favourite animal?” A cliche but certainly acceptable answer would in my view be “elephants”. It is impossible to experience these animals and not at the very least be intrigued with their behaviour and endless range of emotions, characteristics and personalities. Elephants can be funny, imposing, insecure, bullying, menacing, playful, sad, terrified, benign – you could keep adding to this list, but the key thing is that they can be ‘read’ almost as easily as an open book.

There is also plenty of sad facts around elephants and the poaching of their tusks for their ivory. And while these are certainly true and worrisome, the irony is that in this part of the continent, southern Africa, the problems with elephants are essentially reversed – they thrive, and as a result there is too many of them. Though the intuitive reaction might be that you can’t ever have too many elephants, the result is that they cause damage to crops, leading to human-wildlife conflict, compounded by problems caused by the ever increasing transport networks and expanding urban zones. In Victoria Falls town for instance, elephants (and other wildlife) can be regularly seen roaming the streets, which makes walking around town at night rather hazardous.

But let’s focus on the good stuff, from a sound recording point of view – the vocalisations they produce, which are plentiful. While I’ve so far not have had the luck to record a lot of close up elephants, I do have amassed a large library of medium distant to distant sounds, some of which are shared on this page. The above recording was made in the middle of the night next to a big lake where I’ve let my equipment roll for multiple nights. Elephants are often present by and nearby this lake, and this night was no exception. Dramatic trumpeting and growling can be heard in the far right of the recording.

The above is a compilation of elephant sounds recorded over the duration of a single night. As the reserve I am staying is fenced & protected by permanent anti poaching units due to the presence of black rhino, the elephants we hear in this recording are a herd that live outside of the reserve, somewhat wedged in between us and the nearby town of Victoria Falls. This may partially explain why this herd often seems so stressed, as it is possible that they have encountered poaching themselves, and have to live in tandem with human civilisation, including a nearby train track, various roads and farmland.

This third sound was captured during another recording session made at the edge of our camp. Its intensity is almost unreal, so much so that it’s hard to believe that it isn’t a sound designed call from a dinosaur or a creature of another age.

During the FGASA course here, we had fairly regular encounters with elephant while in the vehicle. The behaviour on display was different every time, depending on the individual and its mood of the moment. Quite often we ran into young bulls that were roaming around by themselves, as when the males reach their teenage years they eventually get evicted from the herd, generally because with their teenage behaviour and raging hormones they tend to start to annoy the rest of the herd. As most people know, an elephant herd is structured as a matriarchy, meaning that it is led by an old and dominant female, and consists only of other females and their young.

After being evicted the young bulls start roaming and fending for themselves, sometimes temporarily teaming up with an elderly bull to learn the skills of bush survival. And being young teenagers they display exactly the kind of behaviour that you would associate with that age group: showing off, pretending to be tough and strong, but ultimately shy, a bit nervous and quite sweet. It is only this last characteristic that makes them stand apart from human teenagers, I suppose.

The recording above illustrates an encounter with such a teenage bull. When he saw us he turned towards us, flapped his ears a bit, did a few other tough moves, but ultimately walked off. He did eventually turn around again however, and decided to treat us with a warning display – running towards us and tooting through his trunk. Meanwhile our course instructor Mark decided it was a good moment to demonstrate how you can talk to elephants, and told this young one off for its boisterous display. While this likely wouldn’t have an effect on an elephant meaning serious business, in this case the young one stopped in its tracks, turned away, let go off a little blubbering fart (another signature elephant sound) and walked off sheepishly. 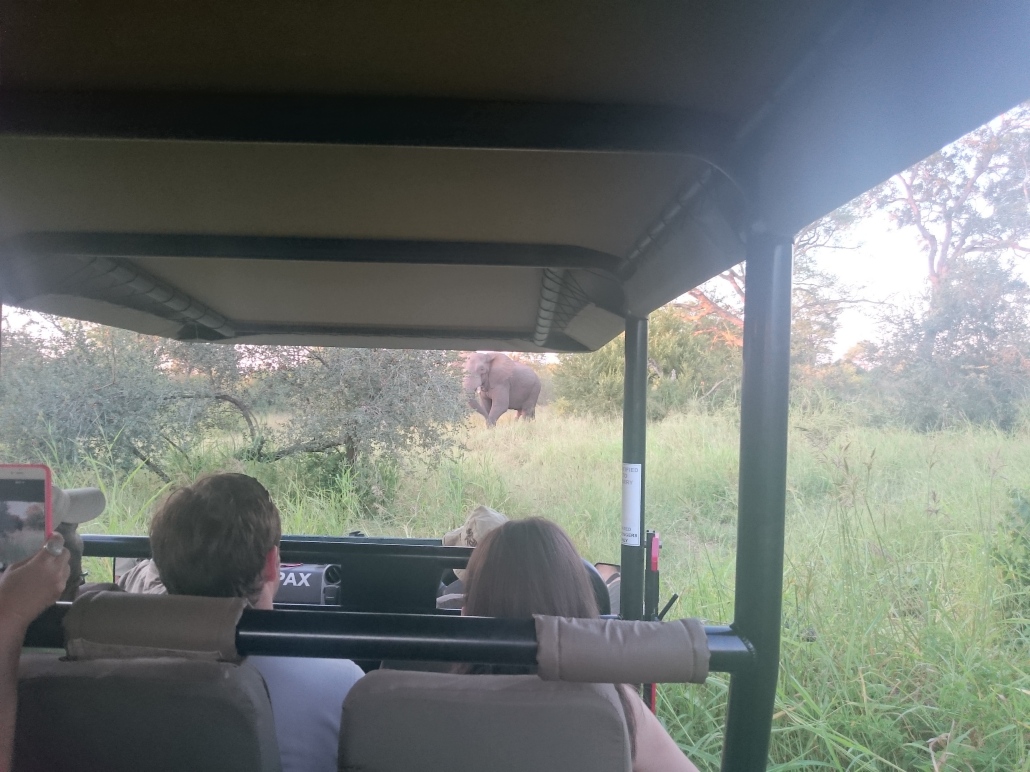 The story above would not apply for the big bull in this picture here. This particular one was in musth, a state of sexual arousal that does funny things to an elephant’s frame of mind. The general rule for meeting an elephant in musth is to stay well clear, if you can. The signs are easy to recognise: he will have an endless stream of dribbling urine running down his hind legs, there is liquid being secreted from the glands on the sides of his head, he will smell very very bad, and will often display pretty aggressive or unpredictable behaviour.

This one showed up out of nowhere, about 15 metres in front of the car, and it certainly made for a few tense moments. Fortunately for us, while he was in musth it was relatively calm, and though he made some warning signals towards our direction it eventually decided to simply move off, probably figuring his time would be better spent finding some female members of his species.

Baboons, the gangsters of the bush
Scroll to top