Spain isn’t precisely the first country that would jump to mind when thinking of big cats and great apes, but nevertheless I recently went there to get some high quality, close up recordings of lions and chimpanzees. I was given permission to spend a day at the most excellent wildlife refuge centre Primadomus, the Spanish headquarters of the Dutch foundation Stichting AAP. AAP/Primadomus rescue animals, in particular primates and big cats, rehabilitate them and either find them a new home or let them live out their days at AAP/Primadomus’s generous facilities.

I normally try to record animals in their natural environment, in the wild so to speak. I think there are a lot of unique calls and interactions that can only be observed and recorded that way. But the flip side of recording in the wild is that unpredictability is huge, so you need a lot of time and a healthy dose of calculated luck. Being granted permission to spend a day in close proximity to species as vocal as chimpanzees and lions was a great way for me to get some recordings I would otherwise struggle to get. 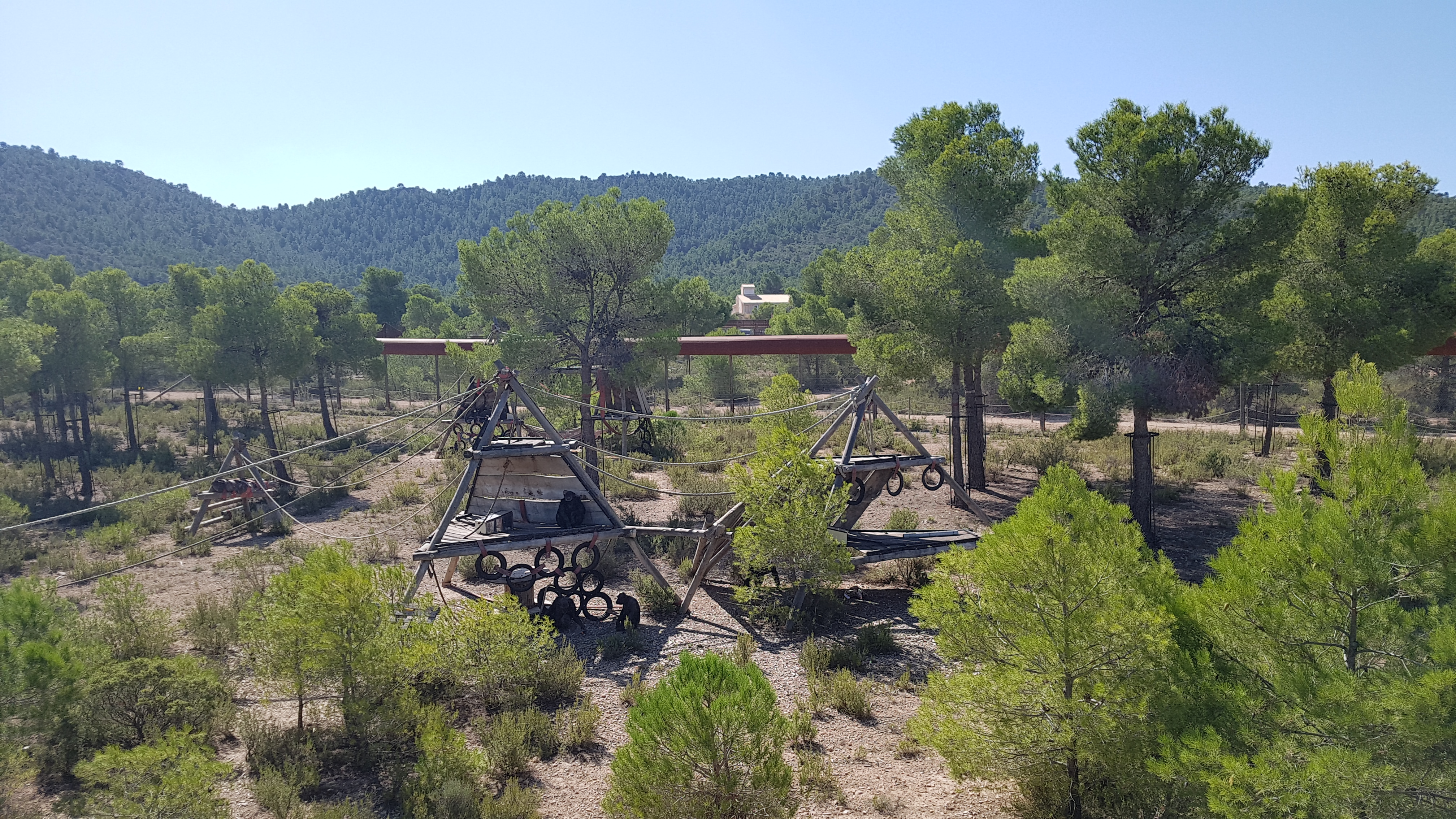 One of the two generously sized chimp enclosures. There are also separate areas for other primates, and the big cats.

The Primadomus complex is a sprawling expanse, housing a very sizeable group of wildlife inhabitants. It is home to more than 14 big cats (mostly lions and tigers), and dozens of primates such as chimpanzees and Berber macaques. The animals are all given considerable space under the Spanish sun, and because it is not normally open to the public, they enjoy a relatively peaceful existence.

And they deserve nothing less, because every animal here has a very sad history. All came here after being rescued by AAP/Primadomus, for instance from circuses or private individuals who thought it would be interesting to have a chimp or lion as a pet. It boggles my mind how stupid or cruel someone can be to take an animal like that as a pet, but neither human stupidity nor cruelty are known to have any limits.

The stories that staff at Primadomus told me about the personal histories of some of the wildlife under their care were heartbreaking. Take Bingo and Antoine, two chimpanzees who now live together in the same enclosure. Antoine had spent 10 years of his adult life locked up in a basement without any natural light, and Bingo lived for years in solitude in an old zoo after having been abandoned by a circus. I wouldn’t wish any of this to any type of animal, let alone human being, but chimps are sentient creatures and the thought of them going through a life like this is, to me, akin to a human treated as a slave and locked up in a dungeon.

The cats haven’t fared any better, with for instance the beautiful, long-maned older male lion Reza having lived for 13 years in a circus trailer.

The realisation that there are many more animals of all sorts and sizes currently living similar lives in cruel captivity is even harder to bear. Therefore, the work that AAP/Primadomus does is very important and meaningful. It truly is wildlife conservation and rehabilitation in its purest form, and the passion amongst the staff was apparent. I have a lot of respect for this organisation and their people.

A very chimp-like meet and greet

It was therefore a huge privilege for me to be given the opportunity to spend some time recording. Of course it was at all times paramount to be respectful and to try to be as little of a disturbance to the animals’ daily routines as possible. That said, in particular the chimps were well aware of my presence, and occasionally showed their appreciation of me visiting by spitting or throwing faeces at me. I found their welcoming rituals funny, and besides, their excitement around feeding times especially gave me some excellent close up vocalisations, so how could I be anything but very grateful?

Antoine is keeping a watchful eye on the chimp group in the other enclosure, one of which has been taunting him (not seen in the video). This upsets him, and his antics subsequently appear to annoy Bingo, who runs in for a telling-off. Or at least, that’s how I read the situation. 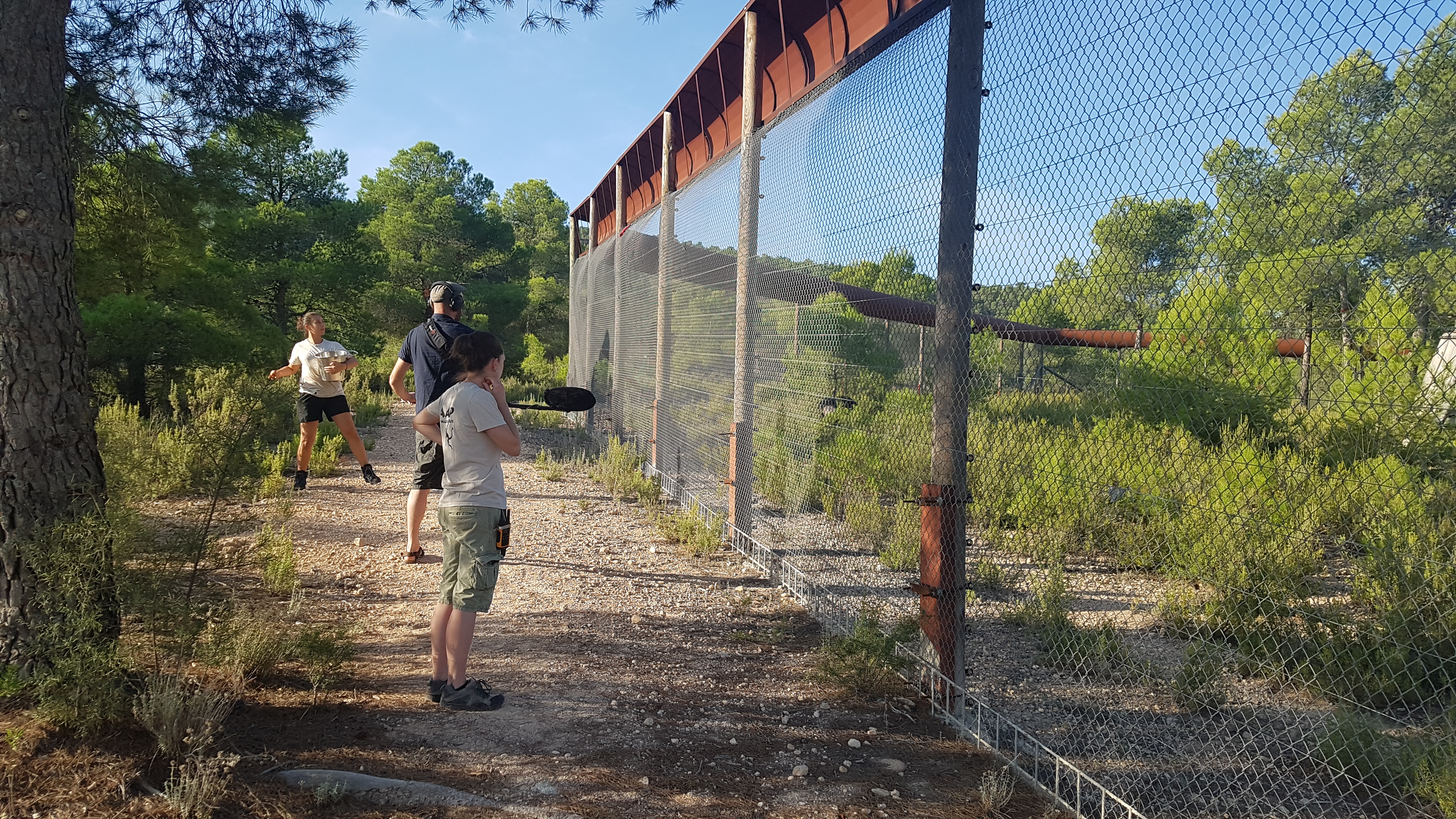 Food is being thrown over the fence when it’s chimp feeding time.

My next time recording chimps will hopefully be in the wild, as I intend to go chimp trekking when I visit Uganda in January 2018 to record new material for upcoming libraries.

The big cats by contrast were far less impressed, and generally hardly batted an eye in my direction – bar a pair of two young lions, Mojito and Tintin, who were very curious and followed me around with great interest as I walked back and forth alongside their enclosure, setting up microphones. 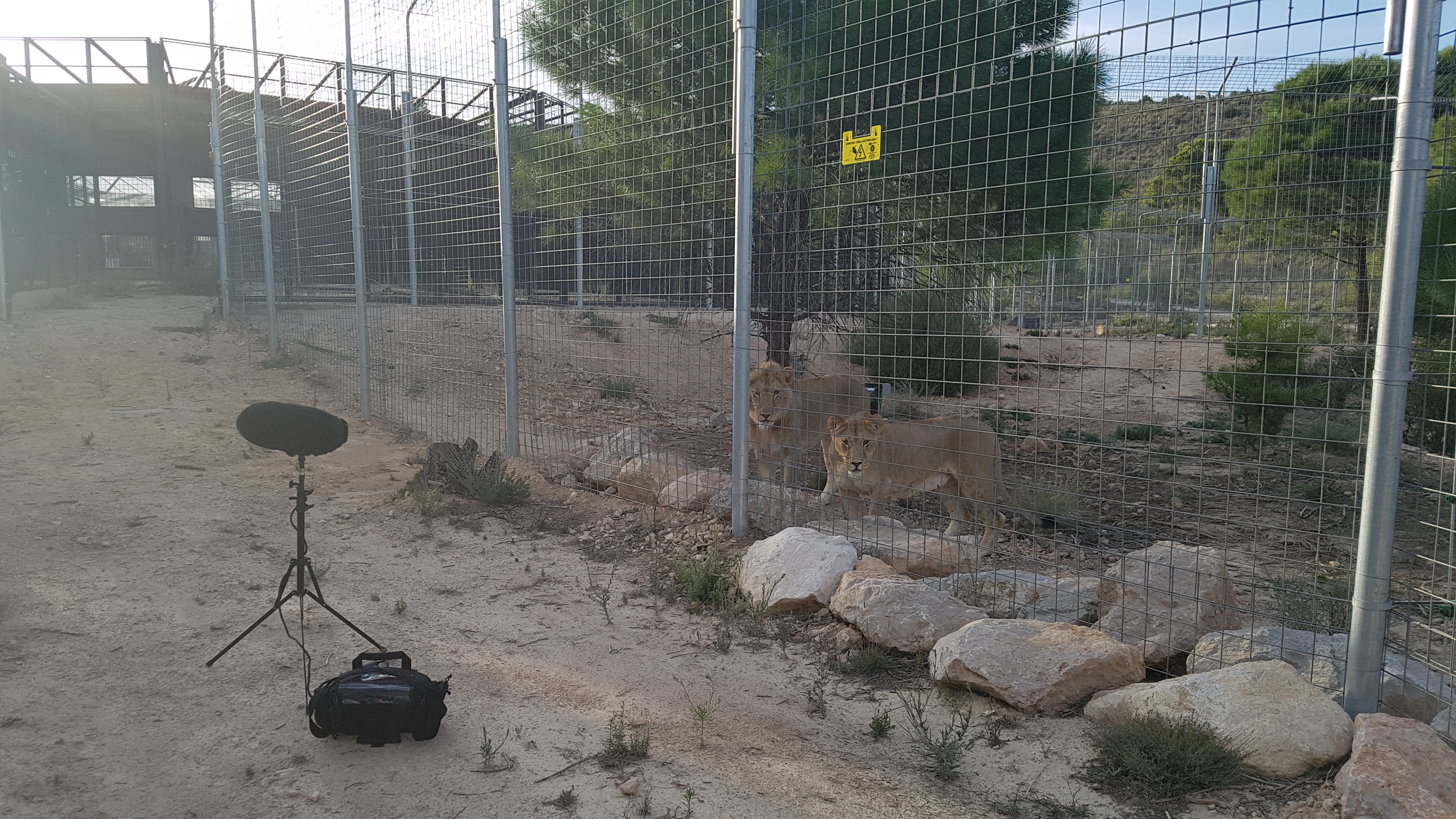 Unlike other big cats at Primadomus, the young Mojito and Tintin were very curious about my comings and goings, and were following me around where possible.

I was given permission to leave two microphone rigs unattended for an overnight session in the big cats area. This was a golden opportunity, as all night long the lions and tigers did their characteristically deep moaning contact calls and growls. These are sounds that vividly take me back to my tent in Botswana and hearing a lion pride producing the same calls after a successful hunt, a mere few hundred metres away. But this time, my microphones were as close as several meters – far closer than I would ever like to be if it was me back in that tent in Botswana!

I’m very thankful to the people at Primadomus, both for the work that they do and for being so generous with letting me spend the day with mics in tow. Please take a look at their website, and consider donating to their cause.