Tomorrow my plane leaves for Zimbabwe. I’ve planned a 4 months trip through southern Africa, with the aim of recording wildlife and nature sounds. Besides Zimbabwe, I’ll visit Botswana, Namibia and South Africa, and I literally want to record anything I can – I have no specific goal to record a type of species or sound, and neither do I have a particular end product in mind. It’s simply about the joy of recording, and hopefully finding places that aren’t as infested by manmade noise as Western Europe is. As you can imagine though, there are a number of potential problems and pitfalls that I’ve tried to address before setting off, in order to get an as good result as I possibly can.

I have never been to Africa, and I know nothing about the habitats and wildlife of the countries and natural parks I am visiting. I have seen nature documentaries, but that is about the extent of my ‘knowledge’. I could go and plant my mics and see what happens, but I want to take it beyond that and try to have a better understanding of what I am recording, and how to record it.

For that reason, my time in Zimbabwe will be spent taking a 55 days professional safari guide course. This is a very intensive, 7 days a week training program, after which you get the opportunity to try and pass an exam. If you pass, you are awarded a Level 1 Field Guide certificate, accredited by the Field Guide Association of Southern Africa (FGASA). In other words, you can then work as a junior safari guide. Have a look here for the full overview of what is being taught in this 2 months course.

I have no intention to change my career to become a safari guide, but I am very interested in the knowledge taught at this course. It includes subjects such as animal behaviour, ecology, geology, plants and grasses, weather and climate, astronomy – it’s incredibly diverse as it’s intended to steamroll you into having general knowledge about the environment and the wildlife of southern African countries. We’ll spend multiple hours in the bush every day, both on foot and in a vehicle, setting off twice a day, just before dawn and a few hours before dusk, with theory classes taught back at the camp as well.

While I will not be Mr Super Survival Man & The Ultimate Field Guide Expert after a mere two months of intense training, it should hugely increase my knowledge about the places that I am visiting after the course. With a bit of luck, I can also get some sound recording in while there. 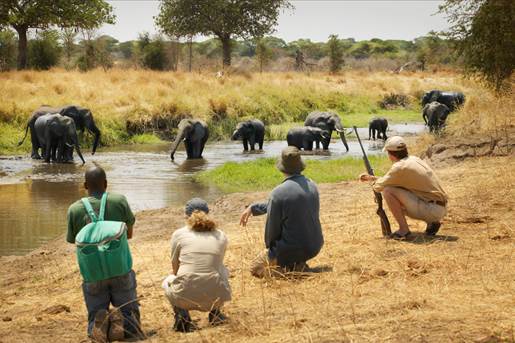 This photo was taken at the Nakavango centre in Zimbabwe, where the field guide course takes place
Image credit Nakavango Conservation Centre

The obvious and most convenient way to see, hear and experience wildlife in Africa is to go on safari. This is also pretty expensive, and it gets worse when you want to do sound recording whilst on safari. If you want the guided experience but not be in a group of noisy tourists, you will have to fork out big sums to rent your own driver, guide and cook, plus all the camping equipment. At about USD200 per day (at the budget end of the line, it could be more), the cost spirals out of control quickly, in particular if you want to spend more than just a week in the bush.

The cheapest alternative is to do a self drive safari. You rent a 4×4 truck with a rooftop tent, and off you go. You arrange camp sites within natural parks yourself and try and find the wildlife by yourself as well. While to some people this sounds like they might not ‘see all the wildlife’ because you’re not with a professional guide, the plus side is that you have the freedom of your own vehicle and can try and camp somewhat remotely.

So after the 2 months course in Zimbabwe I’ll rendez-vous with my girlfriend in Johannesburg, where we’ll pick up our rented 4×4 Toyota Hilux and rooftop tent. From there we’ll drive into Botswana, visit multiple national parks looking for remote spots, do safari drives and of course I’ll try and record plenty sounds, at day but likely mostly at night. We’ll also drive into Namibia, and for the final 3 weeks we’ll rent a normal 2 wheel drive to cruise along the coast of South Africa. While renting a 4×4 to do a self drive safari & camping isn’t the cheapest way of doing holiday either, it certainly pales in comparison to the cost of doing an organised safari and sleeping in lodges, with the added benefit of making your own plans and following your own path. 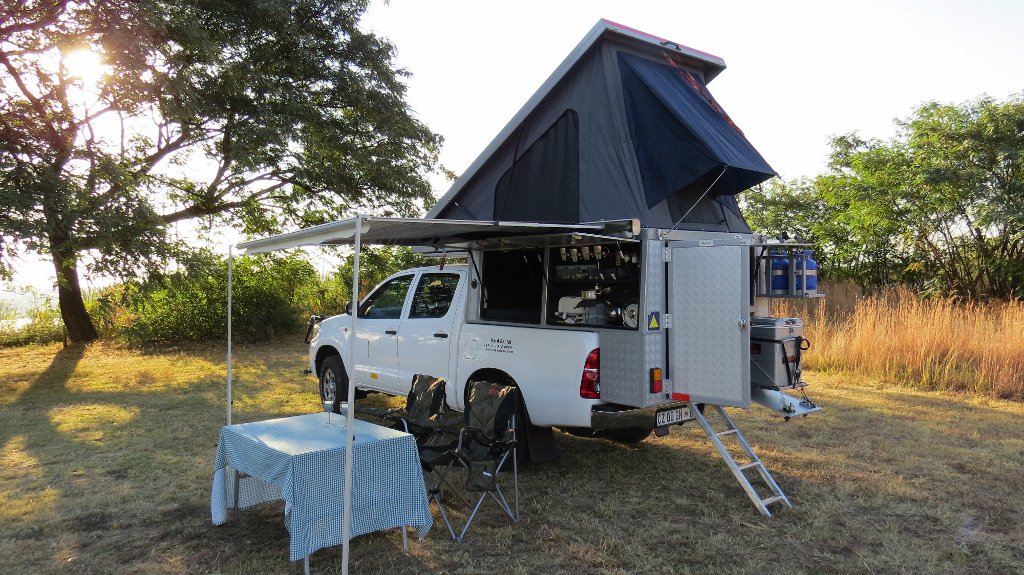 A Toyota Hilux with rooftop tent and camping gear – pretty much similar to what we have rented from Bushtrackers
Image credit drivesouthafrica.co.za

Problem 3 – Bringing equipment is a hassle

I love my Sony D100 handheld recorder, with its built in mics offering really good sound quality for such a small unit, and its size so convenient. But I could never drag myself all the way down south to Africa and not bring an additional bunch of high(er) quality recording  gear that is suitable for various types of scenarios. For the recording geeks, here’s the equipment list I’m bringing:

A fair amount of stuff to bring down, and while not a crazy bulk, I’ve spent a long time trying to work it all out in terms of how to take it with me. Ultimately, what it boils down to of course is that the most fragile and essential stuff goes with me in my hand luggage. Only the large items that won’t ever fit in, such as the Telinga and Manfrotto, are going in the checked luggage. 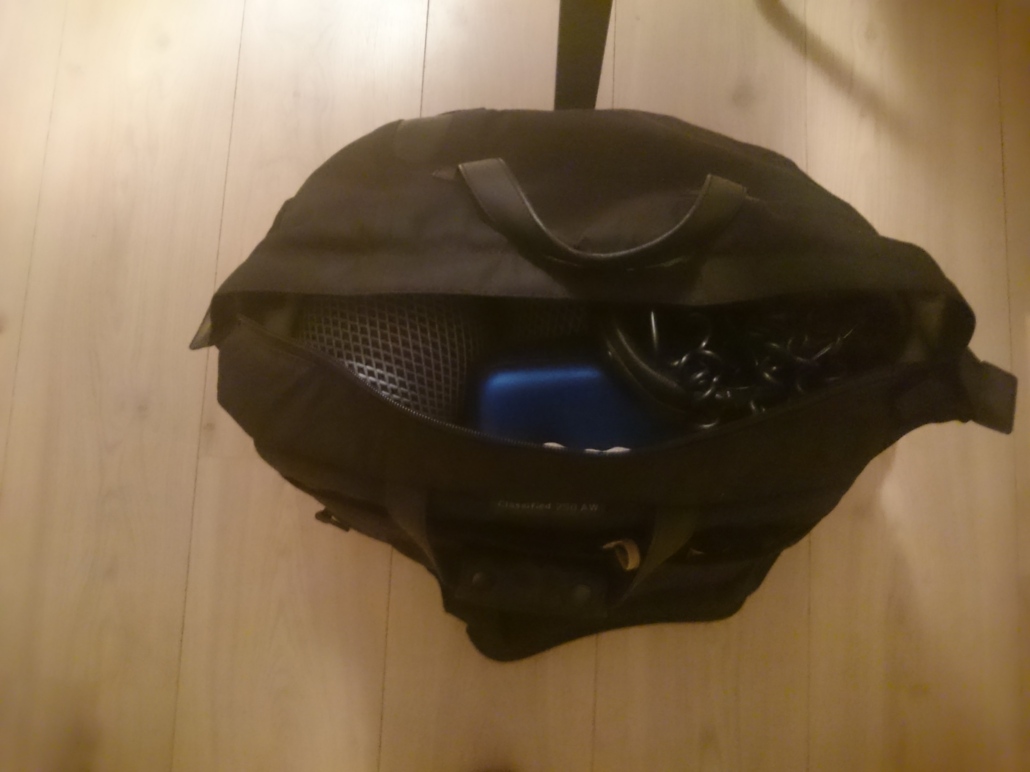 As I’m also bringing study books for the course, clothes, medicines, and all sorts of other items that I will ‘need’ I’m not quite backpacking my way down to Zimbabwe, checking in two big bags that each weigh roughly 20kg. And I’m not even mentioning all the problems I faced with trying to find equipment insurance. It was surprisingly tough getting insurers to even give me a quote – for some reason my plans spooked them, even though it’s far from the most extreme kind of recording project ever undertaken. I did ultimately find a couple of insurers that were willing to give me a quote, but it seems that a lot of the others were put off by how long I’ll be spending with my gear in a car and tent.

Wildlife by and large gets vocal at night. Nighttime is also when the hunters come out to search for prey. There really is no way that you can walk around your campsite in the middle of the Okavango Delta at night, happily carrying your Telinga rig recording birdsong. These campsites aren’t fenced – that is the attraction, but also the danger. So when it is night, you stay put in your tent, and you won’t end up as dinner, simple as that. I don’t know much about the African wildlife experience at this stage before flying off, but I do know that.

Long story short, if I want to record sounds at night, it’s going to have to be from a stationary rig. Forget the handheld-walking-around-with-the-Telinga scenario, that is more a nice-to-have for the occasional birdsong recording at day. My D100 and MKH 8040 ORTF will likely see way more use, especially at night. But while I could plant my ORTF at our campsite for overnight recording, I’ve read many a story about curious hyenas and monkeys entering your camp at night, who may very well take whatever you have left behind – no matter if its any use to them. A Sennheiser ORTF rig probably falls within that category, and sure as hell my insurer is not covering a monkey taking it with it into the bush.

So I haven’t quite figured out this problem yet, and will just have to take it as it comes. Maybe my instructors at the guide course come with some handy tips and insights. Likely what I will try to do is tape/cabletie my D100 into a tree for overnight recording, and find a way to tape/cabletie the ORTF to the car somehow (maybe to the bullbar), and run cables into the tent where I can monitor while safely inside. When it comes to daytime recording, I’ll have to see how it goes. Perhaps there is a way to record from the car window occasionally while we are on our safari game drives.

So there you have it, a rough summary of the plan I’ve been working on for the last half year or so to go and record sounds of wildlife and nature in southern Africa. How it will pan out, I have no idea, but I’m sure it’ll be more than worth it. I’m feeling way more than just excited about it all – I even quit my job to be able to go and do this!